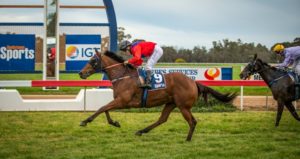 A crowd of around 1, 500 people turned up at the annual Forbes Cup on Monday to see jockey Andrew Banks win the $30, 000 Forbes Cup on Zarlu. “It was a really good race,” said Allan Black, Secretary of the Forbes Jockey Club after Banks had to replace an indisposed Brad Clark. Zarlu is trained at Wagga Wagga by Peter Morgan and defeated J Kissick riding Leucura and Clayton Gallagher on Dark Mojo in the seventh race of the day over 1, 600m. It was a first time entry for Zarlu in the Forbes Cup.

The main sponsor of the Forbes Cup for the past 21 years is Bankstown Sports Club from Sydney. Almost 200 supporters travelled all the way to Forbes to enjoy the day, with some of them doing it for the 16th year in a row.

The Forbes Services Memorial Club has also been supporting the biggest race in Forbes for 22 years. Last week Wayne and Denise Richards, President and Director respectively, handed over a $6, 600 cheque to John Rennick of the Forbes Jockey Club.

Another exciting event on the day was the unveiling of the Club’s new $110,000 irrigation system for the race track. Present at the unveiling were Michael McCormack, Small Business Minister, Phyllis Miller, Mayor of Forbes, Gordon Lindley and Scott Kennedy of Racing NSW.