Home » Youth To Shine In Forbes Next Week 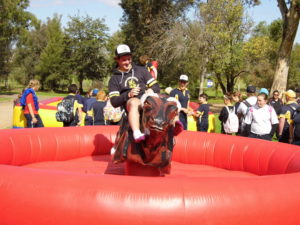 It may be happening three weeks after the actual event, but Forbes will be celebrating NSW Youth Week next week with three massive events for the town’s youth. The real NSW Youth Week run from April 8 to April 17, however in Forbes, that particular week clashed with exams at Forbes High School and Red Bend College.

With the following two weeks being the school holidays in between terms one and two, Forbes Shire Council decided to push its Youth Week events backwards, to next week.

Events will be taking place on May 4, 5 and 7, with each day providing a different range of activities to celebrate the young people of Forbes. Forbes Shire Council Youth Development Assistant Clarissa Stewart, who is the main organiser of each Youth Week activity, said holding each event next week was the best way to ensure Forbes’ youth could get involved. “The actual week of NSW Youth Week was at the same time as the exams period, and then there were the school holidays after that, which lots of people go away for, so we decided to bring it back three weeks,” she said.

“We thought this would be the best way to get the town involved, plus the schools will also be involved, so it needed to be at a time they could do that.” The week’s activities will kick-off at Forbes High School next Wednesday with the ‘Super Mega Fun Day’, which will be held at the school between 1pm and 3pm.

Activities will include a bungy run, a bucking bull ride, and a gladiator ring. The bungy run involves two people racing against one another on a jumping castle, while being restrained by a bungy rope. Competitors must fight against the rope, and the first to reach the end of the jumping castle is declared the winner.

The gladiator ring involves competitors standing on inflatable platforms, in an inflatable ring, and using a padded stick, they must fight one another until one falls off their platform. The last one standing is declared the winner.

Various providers of youth services will also be on deck to give information. The Youth Awards Night will be held at Town Hall from 5.30pm next Thursday night, while ‘Youth Fest’ will be staged at Nelson Park the following Saturday.