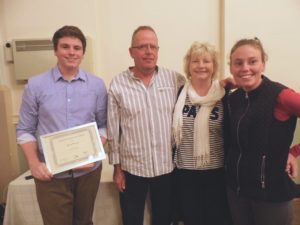 Forbes Shire Council held the 2016 Youth Week Awards on Thursday 5th April to acknowledge and recognise the positive contributions our youth make within the Forbes Community. Twenty three nominations were received and were judged by an independent judging panel of community members. Forbes Mayor Phyllis Miller said the standard
of each nomination was very high. The Young Sports Volunteer Award acknowledged the dedication and the many volunteer hours Jack Piercy contributes to the Forbes Netball Association and Forbes High School. Courtney Ward received the School Youth Award for her excellence at school, her strong leadership skills and for her strong community spirit. The Further Education Excellence Award was taken out by Aiden Clarke for his dedication and passion for his studies in Early Childhood. The Brighter Future Award recognises a young person who is endeavouring to make a positive change to their lives and Blake Harrison was a very worthy recipient. The calibre of the nominees suggested for all categories was particularly high and for the first time the judges were compelled to award Maddi Collits a Highly Commended in the Major Youth & Community Award before announcing Liam Bosma as the overall winner. Liam’s extensive involvement in the Youth Advisory Committee and Spectacular Screenings over the past four years as well as being named the Central West Volunteer of the Year in 2015 were just a few of the factors which made him the winner.
By Anita Morrison