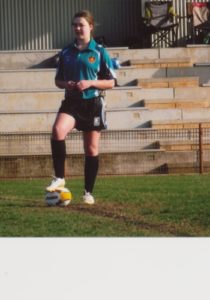 A young indigenous Forbes girl came one step closer to her dream when she was selected to referee at the fourth Nations of Origin Tournament at Raymond Terrace recently. At 15 years of age Shanika Harpur is hard at work to realise a dream of becoming an NRL Referee one day.

As the only representative from Forbes at the tournament held from 12 to 14 July, she honed her refereeing skills and felt her confidence enhanced by the experience. She had to fill in an application and went through a development referee process in order to be picked.

“Bring it on!” was her reaction when she was picked for the Nations of Origin Tournament. The event has been designed to get young Aboriginal and non Aboriginal people involved to promote reconciliation within communities.

Shanika has been a referee for the past two years in the Woodbridge Cup run by the NSW Country Rugby League including all levels of rugby league teams from Burrangong, Canowindra, Cargo, Condobolin, Eugowra, Grenfell, Koorawatha, Manildra, Molong, Peak Hill, Trundle and Woodstock. She attributes her love of refereeing to her Pop, Ron Hocking, who has been a referee for 36 years in Forbes.

Shanika’s next step is to get into the Referees Academy of the Country Rugby League next year to take her performance to the next level. “We are very proud of her,” said Sandra Hocking, Shanika’s Nan and biggest supporter. Shanika said she was getting a lot of support from Willy Barnes of Peak Hill, who is the referee coordinator. “She looks up to him as he has a good attitude with the young ones,” said Sandra.