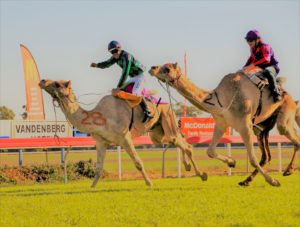 Wookatook, owned by John Richardson of Yeppoon, stormed in to win the coveted cup. Wookatook was ridden by John’s son, Troy, who also won the Jaye Davie Fam- ily Memorial for most successful jockey of the day. Little Duke, trained by the Ainsbury family in South Australia, won the Plate and Outlaw Bobaluie, trained by Glenda Sutton from Victoria, won the consolation race.

A total of seven camel races were run with the first and second place winners of each race competing in the Forbes, Parkes and Young McDonalds Family Restaurants Cup. The third and fourth camels ran in the Stuart Brown Memorial Plate whilst those in fifth and sixth place ran in the consolation race. 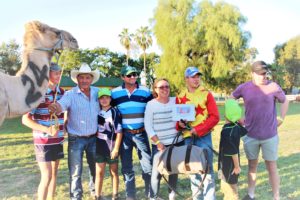 Not only did the Forbes Camel Races pro- vide the local community with something different to enjoy, local community and charity groups including Forbes Can Assist, Redbend Junior League, Forbes Harness Racing Club, Forbes Rotary Club, Forbes Jockey Club and Forbes Netball Associa- tion benefited from donations received as their volunteers rolled their sleeves up to assist with the event.

So why have many Forbes locals and vis- itors enjoyed camel races here for the past 16 years? Whilst attending the camel races on a family holiday in Blackall, Queensland in 2000, the late Graham Marsh was in- spired to bring the camel races to Forbes as he thought it would be a novel and great family day out. Graham’s legacy lives on thanks to the two hard working coordina- tors of the Forbes Camel Cup his daughter Lee, and Kerry Dunston.

As you are probably aware, camel’s make a variety of moans, groans and deep, throaty bellows whether racing or at rest. But did you know one of these camel noises was used to voice the character Chewbacca in the Star Wars movies?