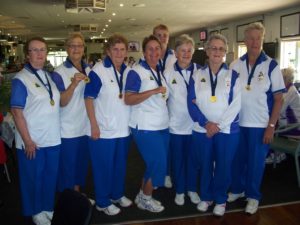 Last Tuesday and Wednesday Forbes was host to the Region 12 play-offs with pennant teams two, three and four from Dubbo, Orange, Gulgong, Parkes, and Forbes competing to play in the State Championships in August at Nowra. As Forbes were the number two pennant team to win at district level we played Dubbo City and although we had a slow start our Forbes team kept on winning each end until we passed their score to win by three shots, 31-28. What an effort and we were rewarded with a gold medal by our District President Annette Tisdell and now are off to play in the State Championships on August 15- 17. All districts in New South Wales will be competing and several of our players were lucky to be playing in this event in 2006 and are excited to represent our small club once again.