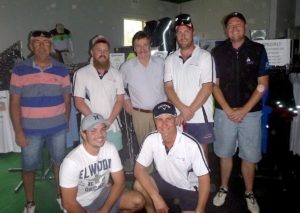 Local golfers took out many prizes at the Lachlan Valley District Golf Association Championships and Pennants held in Forbes on Sunday.

Peter Dawson won the Moulder Cup with a score of 69, closely followed by John Bet- land on 70. Forbes also won the A division, B division and handicap pennants.

Justin Sutton from Parkes won the Cham- pion of Current Champions with a par score of 72.

On Saturday a field of 33 pairs played the 4BBB Stableford Medley event for the prestigious Hawke Trophy.

The winners were Rod Besgrove and Barb Drabsch, scoring 47 points. Runners-up, on count back, were Lee Grierson and Craig Simmons.

The ball sweep went to 44 points on count back, going to those above plus: 36 – S French/ T Cogswell, Richard/ Fran Smith, K Sly/ C Jarvis, B Slack-Smith/ H Steel-Park;

Players are reminded the proposed changes to rules do not take effect until 1st January 2019. Current rules are valid for all official competitions – no leaving the pin in while putting! Players will be penalised for using the rules incorrectly.