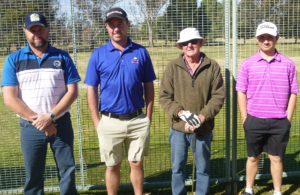 The Sanderson Trophy Day last Sunday was played in very windy and warm conditions with 10 teams braving the conditions in a close contest.

The winning team of Mike Wood, Dan Bayley, Bruce Carpenter and Mike Wood Jnr put on a powerhouse display going round the course in 61 scratch, scoring two eagles along the way, and recording nett 56 ¾.

On Saturday the Men’s competition was an 18-hole stableford, sponsored by Robb’s Jewellers, saw a field of 56 players produce outstanding scores.

In the A-Division Brian Doyle finished with 45 points. His score of 38-38-76 was a model of consistency. Right behind him was Phil Maher with a score of 44 points.

The B-Division was won by Bruce Chandler scoring 41 points. Runner-up was Andrew McDonald with 39 points.

The Winter 3’s competition went to Ray Taylor, Ron Morris and Jeff Haley with runners- up Julie Hurkett, Mary Ewing and Ev Uphill. The prize for the lowest individual score, a 25 nett, went to Kylie Brockman.