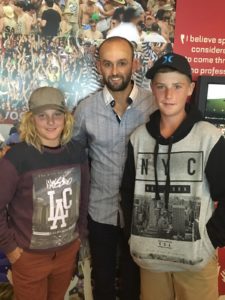 Budding cricketer, Toby Hurford, had the great opportunity to play on the oval named after cricket legend, Don Bradman, at the beginning of the school holidays as part of the Lachlan U/14’s Representative team. The Lachlan side comprises of players selected from Cowra, Parkes, Young, West Wyalong and Forbes with Toby honoured as the only Forbes player selected.

The recent success of the Lachlan team earned them an invitation alongside teams from Hornsby, Southern Highlands, Dubbo, Wagga and Bathurst to play a round robin competition held at Mittagong and Bowral. Toby claimed
a total of nine wickets over the six games played and was rewarded by being awarded with a Don Bradman Commemoratory Coin for most wickets for the Lachlan side. The Don Bradman Museum donated the coins, which were awarded to the player who claimed the most wickets and the most runs in each team.

Toby and his family along with other Lachlan team members visited the Don Bradman museum during their time in Bowral and were in the right spot at the right time meeting cricket star, Nathan Lyon. Toby’s father, Troy, was very impressed with Nathan who was only too willing to talk to the boys and sign memorabilia and pose for photos. Nathan was originally from Young and current Lachlan coach, Dean Schoefield, also from Young, was well known to Nathan. The cricket season has now finished and Toby will now turn his sporting talents to the football field with the Forbes Junior Magpies and will return to the cricket pitch next season.