You are here: Home / Articles / General Interest / What A Right Royal Surprise! 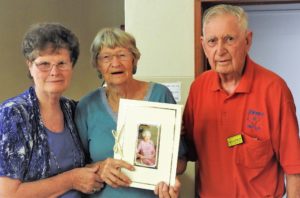 Best friends will do a lot for each other, but this week Gillian Davis had the surprise of a lifetime for her friend Lee Reynolds.

Gillian read the Queen’s letter in which she com- mended both Lee and her husband Lachlan by acknowledging the 2016 Rotary Ipomoea’s annual community service award they had received for their community service over many decades. The Queen also thanked Lee for her poems and de- scribed them as ‘delightful works.’

“Lee is so clever. She is always writing poems,” said Gillian. “We call it scribbling because she always writes on used envelopes.”

Lee’s response was: “I might get up at 2 o’clock in the morning to write something. My mother wrote books, so something must have trickled down to me.”

Gillian was ecstatic. “Now Lee’s talent and scribblings have been acknowledged by royalty!”