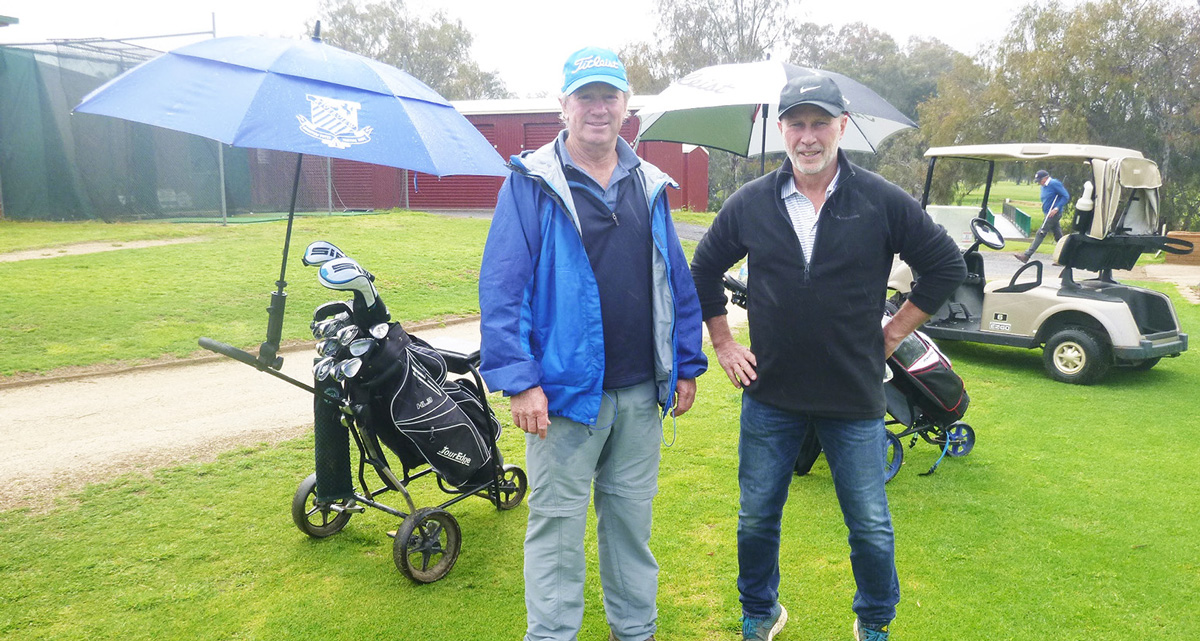 CHOMPING AT THE BIT: Despite the inclement weather, Bede Tooth and Dave Bernardi were keen as mustard for golf in the rain.

Saturday’s Monthly Medal comp, sponsored by Forbes Concrete, was played by a vibrant 93 players despite the wet ground conditions and occasional showers.

A-Grade was won by Caleb Hanrahan (71 nett) on a count back from runner-up Terry Griffiths. There was only one stroke the difference on the back-9.

B-Grade went to Fons Melisi with 71 nett, in a consistent performance. Runner-up was Jake Shaw with his 72 nett, on a count back from two others.

The C-Grade was also tight with a count back needed to decide the winner Allan Rees, from runner-up Trevor Toole, who both finished on 72 nett.

The ball sweep went to 76 nett on a count back, so please check in the Pro Shop. The NTP’s went to: 9th – Caleb Hanrahan, 18th – Will Lovatt.

The 3rd hole Super Pin went to Bruce Chandler with a shot of 1.88 metre proximity, well inside the previous names on the card. There were no visitors.

Being a long weekend there were Stable-ford Medleys on both Sunday and Monday.

In the Sunday event the winner was Jess Hamilton with 40 points, a new player who shows great promise for a much lower handicap. Runner-up on count back was Henry Nash with 39 points, getting the nod from Jarrod Hall (Trundle).

On Monday, in more pleasant ground conditions, the winner was Todd Callaghan who amassed 37 points. Runner-up was Stephen Uphill with 33 points, and a count back from Peter Dawson.

On Saturday October 9, the Club Championships commence. Play will be over four rounds on 9th, 10th, 16th and 17th October.