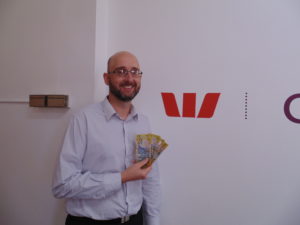 Community groups and charities in Forbes are being asked to make themselves known to the local Westpac branch, as it looks to find the right organisation to give $500 to.

The ‘Community Cash’ project was undertaken by the banking giant to celebrate its 200th birthday a year early. Each branch across regional NSW will be giving away $500 to community groups and charities that write to them to express interest in claiming the cash. A group of local staff from each regional branch will take each expression of interest in to consideration, and determine which organisation would benefit the most with the money.

With the Forbes branch of Westpac looking to determine a winner in Forbes at the end of next week, local organisations are being encouraged to get their expressions of interest in as soon as possible. These should included details about the organisation, what they do, and why they need the money.

Forbes branch Manager Shannon Crowley, the person organisations need to email, said the project was a great concept, as it was local people who decided the winner of the money. “These expressions of interest are not going to be sent off to Sydney or anywhere else. They’ll be judged by staff at our branch, who are locals, and who have a good idea of how this money could be best used,” he said.

In a statement, Westpac said: “The oldest bank and company in Australia turns 200 next year, and they are giving away cash through local branches to celebrate. Westpac Bank completes the milestone in April next year and has decided to help out a local Forbes charity or not-for-profit community group.”

Email Shannon on shcrowley@westpac.com.au or if you have any questions call him on 68501554.