You are here: Home / Articles / We Will Stand Up, Speak Out And Act 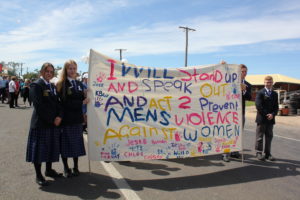 The shocking statistics of domestic violence is a national emergency. This was the message of Nova Peris, the first Aboriginal Olympic gold medalist and former politician, at the fourth annual White Ribbon Day March last Friday.
Nova highlighted the shocking statistic that 90% of Aboriginal and Torres Strait Islander women were victims of domestic violence, but said it was important to remember that not all men were guilty.

Another high profile speaker Peter Gibbs, who established Indigenous Police Recruiting Our Way Delivery (IPROWD) and a former Parkes Spacemen player, drew on sporting analogies for his message. “As a Spaceman we had many battles with the Forbes Magpies on the field, but off the field we always had respect for each other.” Peter said just as a sports team work hard to reach the number one spot, the Forbes community needed to work as a team to get out of the top 10 worst spot for domestic violence in NSW. Ethan Markwort, a Forbes High student who participated in a program called Love Bites, said many sporting role models did not set a good example as they would always blame alcohol and drugs for committing acts of violence. “This is not right.”

Todd Skinner of Northparkes Mines announced the mine had become the first White Ribbon accredited mine in Australia. “More than 80% of our workforce are men and the company felt it was important to train employees to enable them to help prevent and respond to violence against women.” The more than 200 people who took part in the White Ribbon March pledged an oath: I will stand up, speak out and act to prevent men’s violence against women. Charles Dwyer, White Ribbon Ambassador, said: “Today we become the drivers of change through our collective efforts to raise community awareness.”