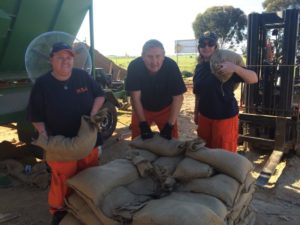 The Forbes State Emergency Service (SES) has been a hive of activity since Saturday with more than 40,000 sandbags being filled by Tuesday.

Local and visiting volunteers have been preparing for floodwater in Forbes this week. The Lachlan River peaked at 10.35m at the Iron Bridge on Wednesday slightly under the level of 10.55m recorded in the 2012 flood. This level is rated as moderate flooding, but with further rain expected from today this may not be the only flooding that will affect the community in the coming weeks. Wyangla Dam is above capacity at present and water released is being staggered to minimise the severity of flooding and damage.

All residents in low-lying areas were alerted and the Red Bend College was closed on Wednesday. More than forty volunteers have been at the SES depot every day to fill sandbags for delivery to areas expected to be most affected. On Tuesday a massive 55.6 tonnes of sand was bagged into approximately 3,500 bags each weighing 15kg. SES volunteers have come from far and wide to assist Roc Walshaw and his crew. They had only praise for the Forbes community and were amazed by the teamwork and community spirit. Visiting SES volunteers stay for about five days, so anyone with spare time is encouraged to help at the SES depot.

The depot provides regular and accurate information regarding the flooding. Even though the flood levels were lower than 2012, experienced volunteers believe that the density of grasses from the winter season will slow the flow of water causing the water to recede and disappear much slower.

The public are reminded not to drive through any roads signposted as closed, as this could compromise their insurance should they get into trouble.