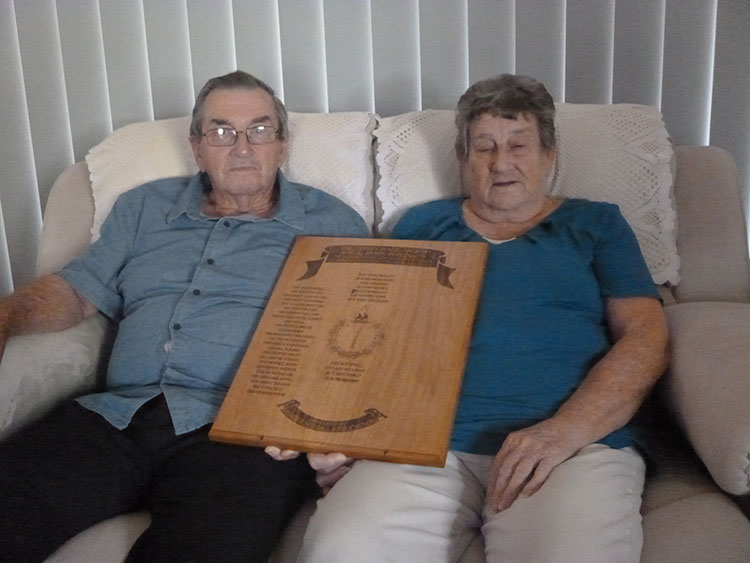 Beryl and Lynnie Roberts with their SOYA 2020 Award.

The Forbes Golf Club Division 3 Pennants team won the Final, played at Duntryleague on Sunday. A close 3-2 result was earned all the way, with on-course Captain Bob Borger clinching the deal.

Greg Webb lost his form to lose 5-4 while Brett Thomas fared no better finishing with an 8-7 loss. Ian Brown was solid all day to win 5-4, and Brodie Hodges came back from 3-down early to win 3-2 and avenge his defeat by the same player in the Pool games.

Bob Borger held the tension to the very end, with his match going to the 18th where his steady chip and good lag putt was too much for his opponent. In the other Divisions, Mudgee defeated Bathurst 4-1 to win Division 1, while Division 2 was won by Parkes over Mudgee 3-2 and Cowra defeated Wentworth by 3.5 – 1.5.

In the Men’s competition on Saturday, a 4BBB sponsored by C&D Floorcoverings, 48 players managed better cores than last week. Bede Tooth and David Bernardi were the winners with 40 points, on count back from Bruce Chandler and Niel Duncan also on 40 points. Unluckily, Barry Shine and Geoff Betland missed out entirely despite their 40 points.

The Sunday Stableford Medley also showed improved scores. The winner was Michael Hanlon of Condobolin with 41 points, who stopped in for a game on his way home. Runner-up was John Boyle with 33 points, but only on count back.

At the 2020 Sportsperson of the Year Awards (SOYA) presentations, Beryl and Lynnie Roberts from Forbes Golf Club were honoured with the ‘Terry Wade Tro- phy’, for the Special Sports Personalities of the Year. This Award recognises the un- seen contribution to sports in Forbes and is very fitting for them both, having been involved in sports around Forbes for over 30 years. Congratulations to Beryl and Lynnie.

The meal is free for players.

On Saturday, 21st March we have an Individual 18-Hole Par, sponsored by Everest Auto Repairs. Sunday 22 March has the Stableford Medley.