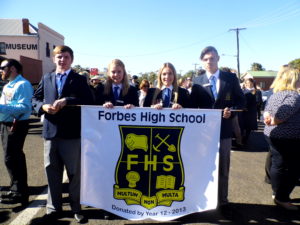 Victoria Park and surrounding streets were packed with thousands of people who came together to honour the special day and welcome the parade which commenced in Cross Street. Our young people played a large part in the parade with all of the schools and early childhood services represented along with veterans, families and local service personnel. Michael Walker and
Robert (Roc) Walshaw conducted the proceedings with Charles Dwyer, Forbes High School Principal, Mayor, Phyllis Miller and Juliet Slack-Smith, St Laurence’s School student, delivering the Prayer of Thanksgiving, Prayer for the Queen and the Prayer for the Nation respectively.

Bryan Stapely, a member of the Canberra Vietnam Veteran’s Motorcycle Club who travelled to Forbes to participate in the parade, gave the Commemoration
to the Fallen before Aaron Parry played the Last Post and the Reveille
as he had done earlier at the dawn service to end the service.

The dawn service was also well attended with hundreds of people welcoming the lager contingent of marchers who followed the police escort to the cenotaph at approximately 5.30am. Captain Meaghan Gallagher of the Salvation Army gave the dawn service address which honoured all servicemen and women. Captain Gallagher said “Those who served created a legend, not of military victories but of courage and determination” and also “ANZAC is a heritage for every Australian”. She then thanked God for the faithful service of our soldiers whose sacrifices have given us the freedom and liberties we enjoy today.