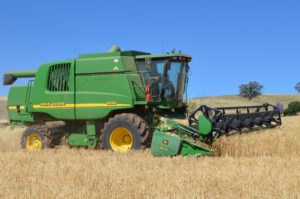 The rain and floods earlier this year had a major impact on cropping with farmers reporting varied results to date for their canola and wheat crops. With the canola harvest finished, and wheat well under way, there have been some positive results from the local farmers.

Neil Mattiske of Sunnydale, who operates a mixed farming operation on the Newell Highway, said they had lost approximately 25% of their canola and 20% of their wheat crop due to water damage. “The canola has been quite average, however the oil content is up around 45-47% oil, which means we are entitled to a bonus, which is great for the farmers.” Neil said the wheat harvest would be finished by next Friday to the north, and to the south and west they would be 50% through their harvest, “as along as we don’t get any more rain”.

He said the wheat harvest was really good in patches, with it going ASW (standard wheat), and some going H2 (which has 11.5% protein). “Under the old scale, we are getting around 15 – 18 bags to the acre, with our best paddocks producing 24 bags to the acre.” When the harvest is done, work on cutting lucerne and hay irrigation will start before Christmas, and after the festive period crutching will start.