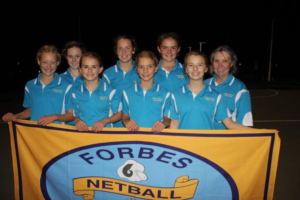 The State Age Championships is the biggest female sporting event in the southern hemisphere with more than 3, 000 athletes, 309 teams, 87 netball associations and more than 400 coaches and 500 umpires. The event has four age groups – 12s, 13s, 14s and 15s, competing at four venues, as the event is too large for one venue.

Division 1 will be played at Campbelltown, division 2 at Bankstown and divisions 3 and 4 at Illawarra. Teams will play an average of seven games each day over the three days of competition. The Forbes teams will be joined by a large supporters group of families and friends.

The teams would not be able to compete without the support of parents. Thank you to FNA Secretary, Lyn Ford, who has organised the weekend including accommodation, entries and food.

Three umpires from Bathurst and the Illawarra Association will join the Forbes players. The teams cannot compete without the umpires. Thank you to both Bathurst and Illawarra associations who have supported Forbes for the championships.

FNA umpire Leisa Kenny is one of the volunteers assigned to Division 2 at Bankstown on the Netball NSW Umpire Allocations Panel. The FNA committee wishes the representative teams good luck for the three
days of intense competition. “Play with determination, outstanding sportsmanship and great teamwork.”