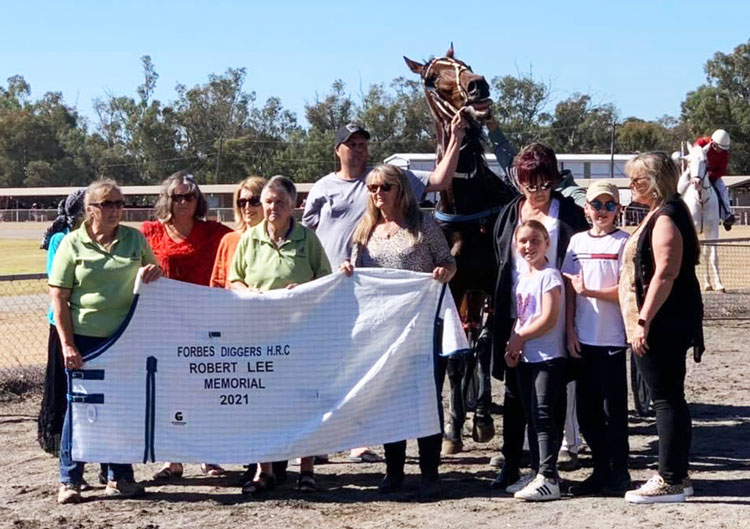 WINNERS: Connections of Robert Lee Memorial winner SUBSTITOOTH who was very impressive in its victory against a strong field.

Steve, Josh and Nathan Turnbull may have taken five of the eight races at Forbes Showground on ANZAC Day at the Diggers Cup meet but it was Bernie Hewitt with two wins including the Forbes Diggers Cup that had tongues wagging.

Trained and driven by Hewitt, “Make Mine Memphis” the $1.75 pre-race favourite was always going to be hard to beat and despite the best efforts of Dazzle Me NZ and Maximus Red, the bay gelding won a short head over the two-kilometre journey.

Make Mine Memphis ran the first quarter in a solid 32.7 on what was a good track before splitting the field in the second quarter with a scintillating 28.8!

The Turnbull family meanwhile had a day to remember with five of the eight winners coming from their stable. Steve was the most successful of the trio with three wins and it could’ve been more had he had some luck in the others.

Saint Julien was arguably the pick of his chargers with the $1.15 favourite storm-ing home in the last quarter in 28 seconds – the fastest split of the day to knock off Royal Feeling and Promise to Rock back in third.

Saint Julien pocketed $1,852 for the win in the Forbes RSL Sub Branch Les Findley Memorial and the horse is only going to get better.

Next race meeting is this weekend as part of the Diggers Cup week in Forbes. Gates open midday Sunday May 2 for the Tab Carnival of Cups in what should be a tremendous day of harness racing. Entry fee is $10 for adults with children Under 16 free. Bar and TAB facilities will also be available.