Home » Treat Your Mum For Mother’s Day To Adam Harvey! 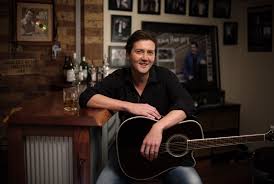 Australian country musician Adam Harvey says he is looking forward to heading out to Forbes again to play for fans he labels as “loyal”. Harvey is currently out on his ‘Harvey’s Bar’ tour, to promote his album of the same name he literally recorded in his back yard. He will play in Forbes at the Forbes Services Memorial Club on Friday, May 13 at 8pm. Tickets are currently for sale at the club.

Mr Harvey said a while ago he decided to build his own bar in his backyard on the NSW Central Coast, and ended up recording an album there. “I put up photos on Facebook of my bar and when I was playing in it, and I’d say that I wrote songs in my bar as well, and people would often then say to me ‘god I’d
love to spend a night in that bar of yours’,” he said.

“So I thought ‘why don’t I record an album in the bar’ and invite everyone around to make it like a live album, and then when people play it, they will get a taste of what a night in my bar is all about.” “I’ve got a double brick garage that we weren’t using, so I just put floors and walls in, and the bar, and a big screen TV. For my shows we’ve got an exact replica of that bar as well so when people come to the shows they feel like they’ve come for a drink and a jam.”

The album was on the ARIA Country charts at number one for seven weeks when it was released. Mr Harvey said he would be playing a mixture of classic country, his older songs as well as songs from his new album. He will be on stage for around two hours.