Home » Total Will As Valydium Wears Down Rivals 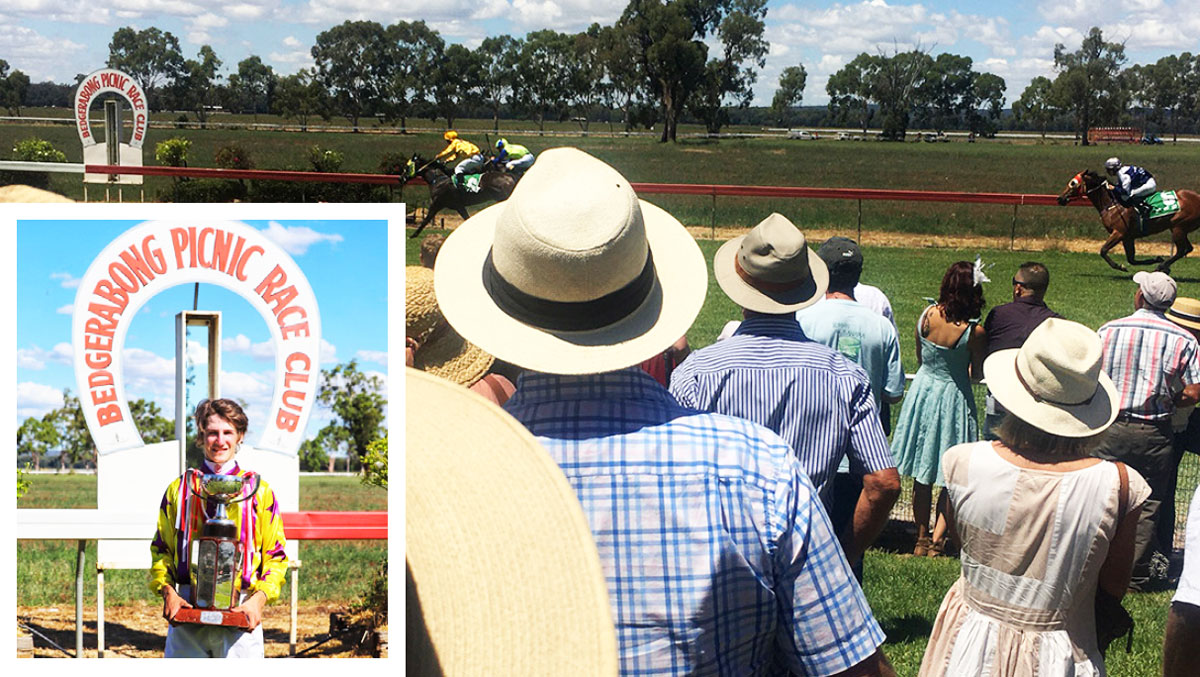 WATCHING HISTORY: Punters from far and wide converged on Bedgerabong Racecourse for the first picnic race meeting in four months as Valydium powers home from Nepenthes and The Bald Eagle in the Total Wear Bedgerabong Picnic Race Cup; INSET: Jockey Will Stanley becomes not only the youngest back-to-back winner but the first teenager to achieve the honour in a feat unlikely to be matched.

In a story to rival any Hollywood script, Bathurst teenager Will Stanley has ridden back-to-back wins in the Total Wear Australia Bedgerabong Picnic Cup. This years win on Dubbo-trained Valydium was one of the most sensational rides since the first race at the current Bedgerabong track in 1933.

Valydium, a $12 half-chance at the start of the race, started slowly and had plenty to do with most of the ten-strong field sitting in front at the halfway mark of the race. The Michael Gray $5 chance The Bald Eagle sat at the front and it was going to take a mighty effort from the Connie Greig led Valydium to run down the pacesetters as they approached the home turn.

Yet somehow, 18-year-old Stanley, who will soon take on an apprenticeship in a bid to crack the metropolitan ranks, mustered a sensational burst out of Valydium as the Dubbo-based horse closed the gap. As the finish line approached, both horses were neck-and-neck as Nepenthes also hit top speed in a last gasp effort for glory.

Stanley, who showed the same composure only a year before when winning his first Bedgerabong Picnic Race Cup on Song One, hit the throttle and Valydium won by a length. The victory made it two from two for the young hoop as Greig and connections took honours over Nepenthes and The Bald Eagle in third.

For jockey Will Stanley though it was hard to believe. “I just want to thank everyone involved with the horse,” the rider said. “Valydium is a fantastic horse and the track and conditions here are superb!”

Leandro Ribeiro had three wins on the day while Bryan Dixon also took two with Shiny Agent and Penny’s Bonita.