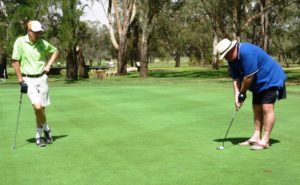 The Men’s competition on Saturday was the annual Ham Day sponsored by Woolworths Forbes. The 62 players contested an Individual Stableford format with some fierce competition.

The A-Division was won by Kim Herbert with 43 points compiled in a craftsman-like manner. Runner-up was Paul Pymont, only one shot back on 42 points. The B-Division was won by Brett Slack-Smith with 41 points, while David Earl finished runner-up on 40 points.

One player locked his keys in the shop and had to use a hire set of clubs, which had a very short child’s putter in the bag. Despite this handicap he did well on the front-9, scoring 23 points but battled home to score 36 points overall. Remember your keys next time Marty!

The NTP’s went to: 9th – W Judge, 18th – P Barnes. There was a good group of visitors from Caragabal playing. Trevor Cooper and Nigel Davies did the best of the bunch.

The Men’s CWDGA Pennants season will commence in late January. All those players wishing to be considered for a  team, please place your name on the list in the Pro Shop. This is an important inter-club event so please support it.