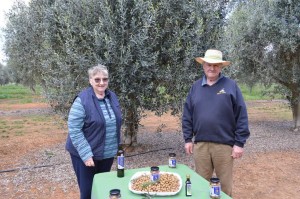 Forbes olive growers Clare and Greg Gibson of Gibson’s Grove have taken out the top gong at the Sydney Royal Fine Food Show this year.

They were awarded the Gold and Champion prize for their Manzanilla olives and they couldn’t be more thrilled about winning the 2015 competition after they took the top prize 5 years ago. “It’s not the first time we’ve entered. We actually enter every year and always get bronze, silver or gold. This is our second winning Championship,” said Greg Gibson.

The Gibson family came to their 300 acre property in 1994 and after stocking it with cattle they decided to diversify their farming interests by integrating an olive grove on their property. They planted 2,000 trees between 1996 and
2002 with equal numbers of Manzanillo, Paragon and Carraggiolla. At Gibson’s Grove they produce a range of
olive oils and table olives which are handpicked. They bottle, cask and tin their oil on the property and cover an extensive boutique market. Their olives have been sold all over the country including the Melbourne
markets, in Business and First Class on Qantas and Singapore Airlines and major hotels in the Blue Mountains.

“It’s very good because it shows that our 2010 effort wasn’t a fluke and we are consistent with our product,” said Greg. The Sydney Royal Fine Food Show is made up of ten competitions held in summer and spring and showcases the best the country has to offer in a wide range of produce.