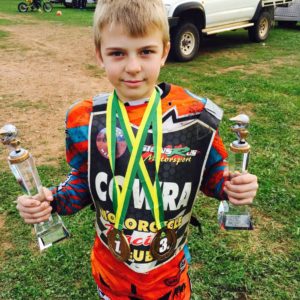 Tom was joined by a number of riders from Forbes including Sam Drane, Holly and Hugh Hope-Hodgetts and Beau Bailey. They competed in the Nippers 50cc Demo Division and all of them rode extremely well. Tom’s next race will be in September competing in the NSW Long Track Titles at the Central Coast. He will also swap his bikes for go karts next month to compete in the Southern Star Series and the NSW Kart Titles at Manning Valley.