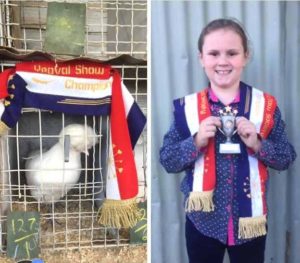 Eight-year old April Bermingham has been making an impact at competitions across the Central West with her prize-winning chickens and ducks. She has already won more awards than her Sausage King dad, Shannon, and has no plans to stop.

April says that her favourite thing about showing the birds is having fun and spending time with the chickens and ducks. Her favourites are a rooster called Rocky, and a duck called Waddles.