You are here: Home / Articles / The Long Night; Remembering Our Heroes 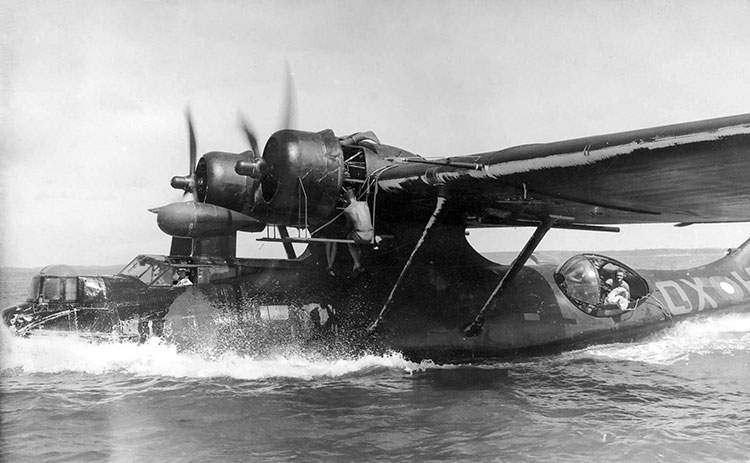 Bryan Monkton and crew on the Catalina.

On Friday, 20 April 1945, the Catalina 43 Squadron RAAF, with Skipper Bryan Monkton’s crew, took off from the waters of Lingayen Gulf in the Philippines. It was my father’s 13th sortie since his crew’s operational duty commenced a day after Boxing day, 1944.

The target on this night was a shipping channel between Hainan and China’s mainland. The Cats were involved in covert mine laying operations supported by the US 7th Fleet, a strategy which demanded decades of secrecy by all who were involved. Thus, my father revealed very little information to me about it. Matching his log book entries to the now available operations documentation online, and reading the story in a book by his old skipper published in 2005, 25 years after dad died, I was able to get a precise perspective of what went on.

The operation on this particular night involved a 12 hour round trip across the South China Sea, to a precise point, to drop the two 907kg high explosive American mines around midnight.

The first was dropped with perfect precision however, on the second drop, the small drogue parachute failed to open which exploded the mine on impact with the water, the men saw the flash first.

Closely following the flash was the force of the explosion. The Catalina reacted as though it had been kicked from beneath by a giant boot. Missing hitting the water from this low altitude by who knows how little, the crew was thrown from their positions and a few scrapes and minor injuries were reported. My father described how much of the fabric covering of the wing trailing edge, ailerons, and elevators, had been blasted off, alongside bits of the mine’s shrapnel that had pierced and holed the hull. He never spoke about it much. The only way that the aircraft and crew could limp back to the Philippines was to throw out all the guns, ammunition, and anything else they did not need. Going down in these waters meant likely capture and execution.

Six hours in the dark, running out of fuel and on one engine for the last miles over land, they finally made water and ran the flying boat almost onto the beach where the Americans were waiting. Monkton writes, “The ramp crewmen were waiting for us in their work boat, ready to attach the beaching wheels, and we were pleased to let them take over.”

It must have been a frightening experience. On the other side of the world, Hitler was not having a great last birthday either. The log-book entry reads: Lingayen Gulf-Hainan St-Lingayen Gulf. Mine exploded on impact.

Just days later they headed back to Darwin, and eventually returned to the Philippines in July for the very last mining ops by the RAAF. Later, a last strike, in daylight, the day before the ceasefire.