Home » That Is Amazing! 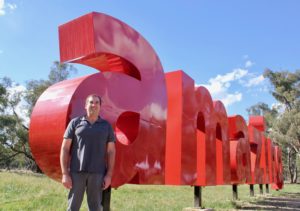 In an amazing community effort the first artwork of the unique sculpture trail between Forbes and Condobolin was officially unveiled last week.For more than 100 community members the spot where seven striking red letters contrast beautifully with the surrounding landscape on the stock route about 18km outside Forbes will always have a special place in their hearts.

Farmers, tradespeople, painters, builders, planners and many more took part in a massive effort to create a community sculp- ture for the Somewhere Down the Lachlan sculpture trail.

Standing in a paddock that was under half a metre of water not too long ago, NSW Governor General David Hurley said:

“I have been here in drought, in flood and in good times – I am not amazed we stand here today. The people of rural NSW are rock steady people with a desire to be different and sustain their way of life.” 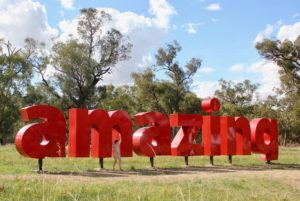 Kim Muffet, a local farmer who managed the logistics, agreed that it was “an amazing response from the community” with a lot of pride in the project. “Today we have an artwork valued at about $170,000.”

For Rosie Johnston, creator and visionary of the bush version of Sculpture by the Sea, it was important that the first artwork on the trail was a “massive and monumental community sculpture. We wanted something that people would say ‘that’s amazing’ when they drive past.”