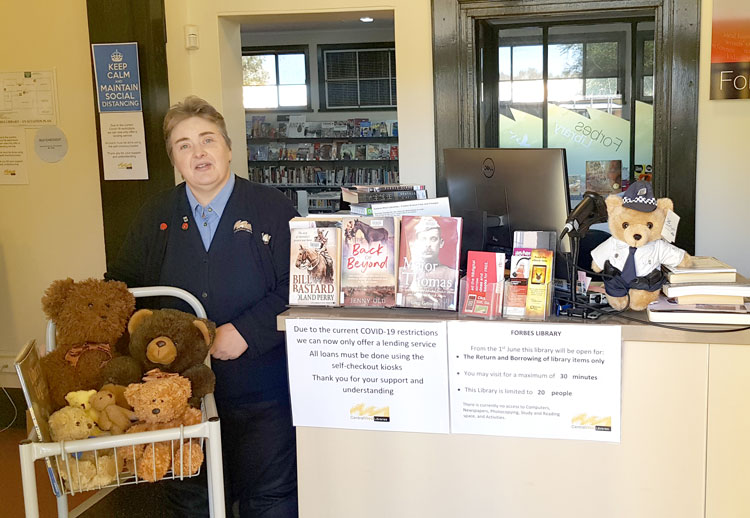 Forbes Librarian, Bronwyn Clark assures the public that the library is open and welcome for borrowing and returning books.

Central West Libraries is asking members to respond to an online survey about what they “missed most” while libraries were closed due to Government COVID-19 shutdown.

The first 500 responses to the nationwide survey of library users has shown that, after book borrowing, social interaction has been the biggest loss felt by the community during the COVID-19 lockdown of public libraries.

The survey, run by the Australian Library and Information Association and Australian Public Library Alliance, found that while 87% of respondents missed being able to borrow print books, 44% missed having expert, friendly help from library staff. 40% of respondents simply missed being around other people and 36% missed participating in events and activities for adults.

Sue McKerracher, CEO of the Australian Library and Information Association, explained, “The role of libraries as places of books, study and learning has always been understood, but the role of public libraries as places where people feel connected continues to emerge. Even before the pandemic, governments were concerned about the mental health problems linked to loneliness. These concerns have been heightened over the last three months during the lockdown. Libraries clearly have an important part to play in promoting a greater sense of belonging.”

“As this was an online survey, we weren’t expecting a lot of people to tick “using the internet”, but we know that the loss of access to PCs and high speed broadband connection has caused hardship for the most disadvantaged and vulnerable in our communities, including homeless people, who rely on the internet through libraries to access Centrelink, MyGov and essential health information,” Sue said.

Public libraries were identified as an important service that could be reopened as part of Step 1 of the National Cabinet’s COVID-19 plan, when it was announced on 8 May. This is evidence of the government recognising the importance of libraries in both cities and regional areas and understanding the loss that people felt in losing access to print books, including larger print books for those with limited vision, free internet, library spaces, face-to-face storytime, rhymetime and craft activities. These services are essential across the Forbes Shire for people of all ages and abilities.

The My Library Survey can be found online; www.cwl.nsw.gov.au