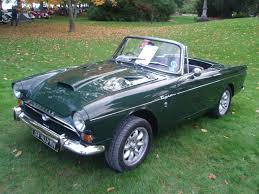 Sunbeam car enthusiasts from across Australia and New Zealand will be in Forbes next weekend to attend the 40th National Sunbeam Car Rally. Highlights of the weekend include a Mayoral Welcome Reception on Friday, June 10 and a public Show and Shine in Harold Street on Saturday, June 11.

During the Show and Shine from 10am to 2pm, locals will have the opportunity to view the range of cars and ask the owners any questions they may have. Sunbeam is best known for its later history under the Rootes Group during the war era and well into the 1950s and 1960s when it produced stylish Sunbeam Talbots and sporty Sunbeam Alpine and Tiger convertibles.

For a small car company, the Sunbeam brand managed many achievements and also had motor sport successes. They had a revolutionary new design in 1959, which was a leap ahead of its British contemporaries with modern features like wind up windows, reclining seats, sporty engines and disc brakes as standard.

The Sunbeam Tiger was resurrected in 1964, which married a Sunbeam Alpine body with a powerful Ford V8 motor based on a prototype produced by American Racing icon, Carroll Shelby. The Tiger was made in limited numbers from 1964 to 1967 and is best known as the car of ‘Secret Agent 86’ in the 1960s television comedy Get Smart.

Mayor Phyllis Miller said Council was looking forward to hosting the 40th National Sunbeam Car Rally. “The Show and Shine on the Saturday will definitely be worth attending as you will be able to have a good look at the different types of Sunbeams on display, especially because they are quite rare in Australia,” Mayor Miller said.