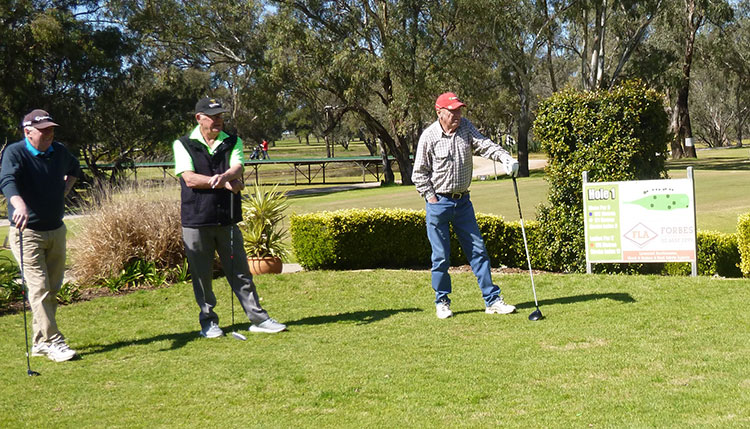 On Saturday, 29 August the club event was a two-person Ambrose sponsored by Marg and Ron Hurst and Shirley Redfern, with the winning groups from the 48 pairs who contested to be eligible to go forward to contest the Golf NSW KENO championship.

The Men’s Pairs was won by Shane Sallaway and Doug Churchill with a nett 58.5. Their score was helped significantly by an albatross on the 6th hole and an eagle on the 7th hole. Quite a remarkable feat. Harrison Callaghan and Warren Baxter were further back on 62.5 nett.

The Ladies’ Pairs was won by Brianna and Carolyn Duncan with a nett 64.8, with help by 2’s on the 9th and 18th holes. A little way back was the pair of Jenny Fletcher and Debbie Tilley on 68.0 nett.

The Mixed Pairs was won by Phil Wells and Fleur von Mengerson-Wells on 59.8 nett. Hot on their heels were John Betland and Nicole Death on 61 nett.

Sunday was a bit chilly with a biting wind, but there was still a modest field in the Sunday Medley. The winner was Anne-Maree Gaffney with 40 points, teaching Ethan Gaffney on 35 points a thing or two. Unfortunately, there was no ball sweep or NTP’s.

Plans are underway for the VW Scramble, to be held on 25 October, focusing on local attendees.

NSW Dept of Health will review the current COVID-19 restrictions, so remember to socially distance in the Golfie and at outside places.

Saturday, 5 September is the Monthly Medal, sponsored by McFeeters Motor Museum. Sunday has a Stableford Medley.