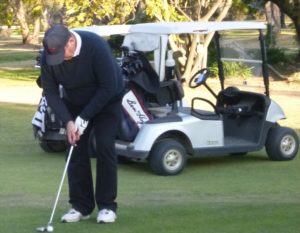 Last weekend was a big one for local golfers, with the 4BBB Stroke Championship sponsored by John Davis Mazda held on Saturday, followed by the Stableford Medley on Sunday.

In Saturday’s 18-hole 4BBB event, the Scratch winners were Steve Betland and Tim West, who combined well to record a 68 scratch score, in a field of 56 competi- tors. Todd Callaghan and Peter Dawson were Runners-up, beaten on count back. They level-pegged with the winners during the initial stages of the back-9, but stum- bled home.

The Handicap Champions were Paul Kay and Paul Pymont, who finished with a nett 62. Runners-up were Linden Byrne and Barry Parker with 63 nett, getting there by count back from Ron Morris and Scott Kirkman.

The Stableford Medley on Sunday was well enjoyed by many players in spite of the lack of sunshine. Ray Taylor was unstoppable with his 39 points, finishing ahead of Mick Wood on 37 points.

The ball sweep went to 36 points, going to Rod Smith (from Tully) and Barb Drabsch. The NTP’s were: 9th – M Wood; 18th – B Shields. The only 2’s were scored by Mick Wood and Rod Smith.

This weekend will also be busy, with an 18-hole Stroke event on Saturday, sponsored by Forbes TV & Video Repairs. Sunday includes the local Stableford Medley, and Opens being played at Grenfell and Tottenham.

The Monthly Medal, sponsored by Walkers AgnVet, will be held the following Satur- day with the Stableford Medley.

Upcoming competitions include the Sand/Grass Green Championships, being held at Grenfell and Forbes Golf Courses on 19/20 August. Nominations are now open. Groups can register together to take advantage of the ‘4 for 3’ package to enter four names and only pay for three. A dinner is available at the Grenfell Club on Saturday, with presentations at Forbes on Sunday. More information is available on the Go to the Golf NSW website.

Also on the horizon are the Lachlan Val- ley DGA Mixed 4-Ball, scheduled for Sun- day July 23 at Parkes, and the Mens 4-Ball vs Par, set for Sun 6 August at West Wyalong. After the success of our Mixed Foursomes, there should be a few good pairings attending at Parkes.