Home » Stevie Is Reaching For The Stars 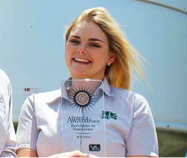 Working in a male dominated industry is more of a motivator for a trail blazing Forbes businesswoman than a hindrance.

Stevie Morrison of H E Silos has been awarded an agriculture and farming scholarship by the Australia School of Applied Management.

“It looked like a great opportunity and I decided to apply for it,” said Stevie, who will be travelling to Brisbane next week for the first of three face-to-face full day sessions. She will also be attending workshops and webinars over the next six months to com- plete six modules in management training.

The accelerated leadership program is designed for women in management positions or women aspiring to be in management.

For Stevie the bursary is also a golden opportunity to network with other women with similar aspirations.

“I want to develop my leadership and man- agement capabilities,” she said. “In the male dominated industries of manufacturing and agriculture, it is often a problem to be taken seriously as a woman. I really hope to learn how to approach situations like this… and I want to become the Richard Branson of agriculture!”

According to Stevie her father, Steven Morrison, will always be her best role mod- el. “I also find inspiration from people like

Richard Branson and Larry Page. Although they are not women, I admire them for their morals and skills.”

The Morrison family business made headlines late last year when H E Silos won the 2016 Business of the Year in Sydney. The prestigious award from the NSW Business Chamber recognized overall business excellence in the areas of growth, innovation, export, sustainability, employment practices and ethics.

Stevie and her father are passionate about innovation in grain storage, but also to ensure food security in Australia and the world.