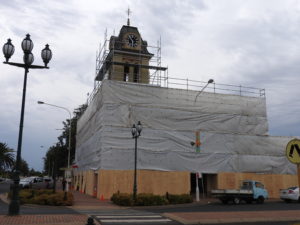 The Forbes Post Office is one of the most spectacular buildings of its era outside Sydney, and it is getting a face lift to ensure it stays beautiful.

Scaffolding has gone up this week, and will hide the historic building for nearly two months while it is repainted, the roof replaced and the town clock made fully operational again.

According to the Heritage Council of NSW, the Forbes Post Office is aesthetically significant, because it is a considerable example of the Victorian Italianate style, and makes an important aesthetic contribution to Forbes as an eighteenth century public building.

The Victorian Italianate style of architecture was a distinct 19th-century phase in the history of Classical architecture. It was first developed in Britain about 1802 by John Nash.

Wonder what colour it will be painted?