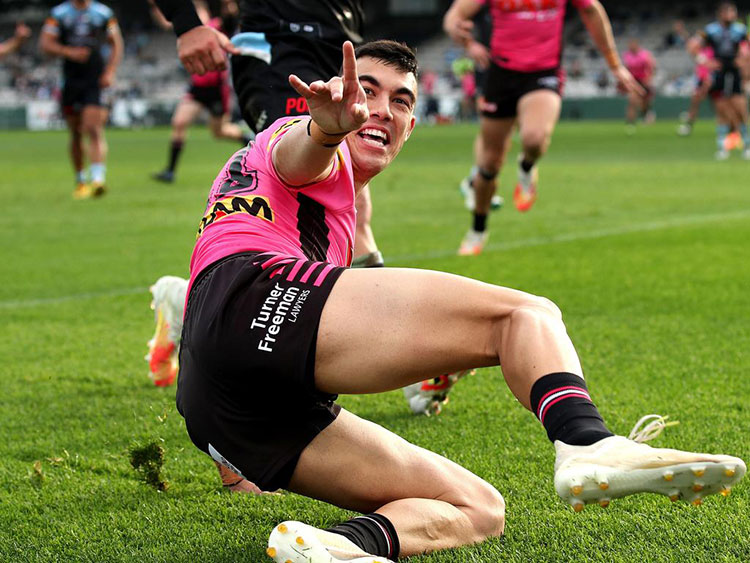 Forbes’ Charlie Staines had crowds roaring when he debuted for the Penrith Panthers at the weekend. (Source: GETTY)

After his stunning debut at the weekend, Forbes’ very own sporting legend Charlie Staines is set to become a household name in football loving homes across Australia.

The rookie winger for the Penrith Panthers played an unforgettable debut last Saturday at the Netstrata Jubilee Stadium, becoming the second player in the Australian NRL’s 112-year history to score four tries in his first top grade game, after Jordan Atkins Gold Coast debut in 2008. Along with his four tries, six tackle busts and four line-breaks for the 56-24 win over the Sharks, it looks as though Charlie will land a more permanent position on the field.

A group of 20 supporters, including Charlie’s parents, travelled to Sydney from Forbes to support Charlie, who said it was “unreal” to see that they had all travelled such a long way to cheer him on.

It seems however, that his rapid rise to sporting fame may be put on hold due to an unfortunate breach of the NRL’s biosecurity protocols.

Despite his roaring success on the field, a short oversight of NRL biosecurity protocols has been met with a harsh penalty. Under the new COVID-19 NRL biosecurity rules, players can host a total of 10 visitors in their home each day, with a maximum of five visitors at any one time. This protocol was breached when Charlie hosted 10 guests, including his immediate family and four friends after Saturday’s game.

Due to an obvious “misunderstanding of the specifics of the guidelines”, Charlie was stood down from playing on Monday, but the Penrith Panthers and Charlie are working closely with the NRL to “ensure all necessary steps are taken to rectify the situation,” said Panthers CEO, Brian Fletcher.

Until then, Panthers’ supporters and the many Forbes’ supporters of Charlie will have to wait to see him shine on the field again.