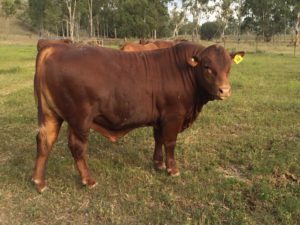 A senepol bull of the Southern Star Rural Senepol stud at Canowindra achieved a top price of $12,000 at the 14th annual 5 Star Senepol and African Hybrid Bull Sale held at Rockhampton recently. Clayton and Sarah Maynard own Southern Star. Their bull was sold to the Goodard family from Queensland.

With 81 lots auctioned, the sale grossed a total of $545,000 with an average of $7,569 and the top lot going for $16,000. Buyers came from Queensland and northern NSW. What sets these bulls apart from other Senepol bulls is that they are selected from over 500 male progeny. Selection is done whilst running on ticky forest country at Mt. Eugene, Jambin and Belmont Research Station, Rockhampton. They have to perform on grass, adapting to heat, ticks, flies and Lantana, with minimal chemical treatment. Geoff Maynard, stud principal for 5 Star Senepol, said there had not been a better time for the cattle industry with record prices throughout the country.

Clayton and Sarah also produce Senegus Bulls (Senepol Angus cross) which were all sold at the auction for an average of $6,000. The Senegus bulls are small birth weight and suited to heifer matings. They have many more variables that affect ease of calving, namely gestation, length, muscle pattern, and nutrition especially in the third trimester.