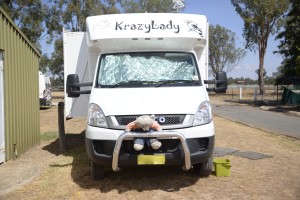 Around 350 campervans and motorhomes rolled into town on Monday for a week’s worth of action, and they are due to hit the roads again on Monday. The Rally was held at the Forbes Showground for the Solo’s Rally, an event that members of the CMCA Solo Network, as well as some couples from the CMCA, participated in.

Solo Network members are members of the CMCA that are single. With between 30 and 40 of the 350 vans made up of couples, it is estimated that
around 400 people made it to the rally.

While the rally is still yet to feature its open and market day, which is on tomorrow for the public to enjoy, throughout the week members have engaged in activities such as dinners, morning walks, tai chi, meditation, arts and crafts, musical sessions, dance classes, seminars and regional tours.

Mrs Parsell said the support Forbes had offered to the Rally was great. “Council let us stay at the campgrounds for free while we set up the showground, and while we were there people came up to us and thanked us for coming.”

Mrs Parsell said many members of the Solo Network had suffered from depression due to being single and lonely (from losing their partners or families) and NSW Mental Health had come on board to run a seminar to help those affected by mental illness.

“It’s also great for those people to be apart of what we do as well. We spend our lives on the road and just have lots of fun together,” she said. Tomorrow’s open day will also feature vehicles for inspection, and in some cases, purchase.