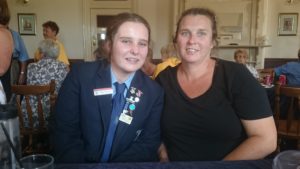 Youth of the Year: Chloe Morrison of Red Bend Catholic College won the Zone 5 Li- ons Youth of the Year finals in Grenfell on Sunday. She competed against other finalists from Cowra High School, Hennessy College in Young and Henry Lawson High in Grenfell.

Each contestant was interviewed by the judging panel, had to answer two impromp- tu questions about the NSW Government Greyhound racing ban and the wearing of uniforms and present a prepared speech. Chloe’s was about disability. She will pro- gress to the District 201N4 final in Cowra on 18th March. The Forbes and District Lions Club will host the state final of the Youth of the Year in Forbes on 8th April. Call Peter Bright on 0419 463 803 if you would like to attend.

Clean Up Australia Day: Remember to head to Victoria Park on Sunday for the clean up day starting at 9am. Volunteers will be provided with gloves, rubbish bags, sunscreen and water, and a free sausage sizzle at Apex Park afterwards.

Probus News: Everyone had a great time at the barbeque with Parkes Probus club on 16th January. There will be a mystery trip this month. The Men’s Probus trip to the Hawkesbury will be in May. Probus membership will remain at $25 – bring it to the March meeting.

Youth Awards: It is time to nominate young persons (12 to 25) who deserves to be recognised for their achievements and contribution to the community for a Youth Week Award. Youth Week is from 31st March to 9th April, with the awards cere- mony on 4th April.