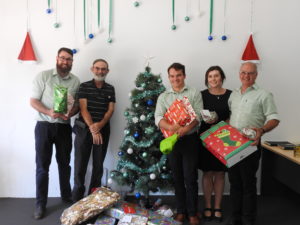 Helping hand: ‘Help us, Help others’ was the catch cry of Ian Simpson & Co … and help they did. David Virtue of Havannah House was delighted to accept gifts organised by Ian and donated by the Forbes Community. “Thank you so much, this will really help make many peoples’ Christmas Day,” said David.

Australia Day: Celebrations on Thursday, 26th January will start at 7am with the traditional Rotary Community Breakfast at Apex Park. Rotary’s community awards will be presented, the Forbes Town Band will perform and this year’s Ambassador, Sandra Bates, will do a welcome. From 10am, the Diggers Family Swim takes place at the Forbes Olympic Pool with a barbecue lunch. The afternoon activities kick off at 4pm at Colin McKenzie Park (Frogs Hollow) on Lake Forbes. Highlights include local entertainment, free children’s rides, the CWA Damper Competition, pedal boat rides, an antique machinery display and fireworks. There will be food stalls, a bar, games and displays from community organisations including the SES, Dragon Boats, Fire Brigade and Rural Fire Service. The Forbes Shire Citizen of the Year and the Forbes Shire Young Citizen of the Year will be presented at the official ceremony at 6.30pm. Nominations are still open and accepted until 5pm on 18th January. Nomination forms can be downloaded at www.forbes.nsw.gov.au.

Find it in Forbes: In past years winning tickets were drawn from a barrel, but due to the huge number of entries a concrete mixer was brought in for the 2016 draw. Gabe Miller-McMillan said close to 100,000 tickets went into the draw. This means $1 million was spent in Forbes in the lead up to Christmas. Fantastic work! 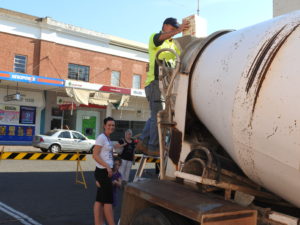