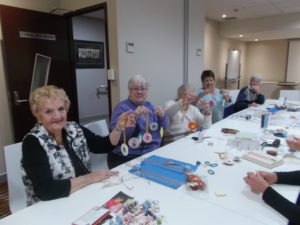 Forbes Widows Support Group: Thirteen ladies enjoyed a paper craft creations afternoon at the Forbes Services Memorial Club on 17th August. Sandra and Grace Hosking from the Trundle Craft Shop hosted the event with the ladies sharing ideas and laughter as they glued together paper, doilies, cardboard and flowers to make Christmas decorations and a variety of
cards for special occasions. Mayor Phyllis Miller presented the group with a cheque, which came from the proceeds of the Orange Male Voice Choir Concert, and will be used for future outings.

Movie winners: The first winner of our Forbes Services Club Cinema competition is Neil Lambert, and the second fortnight’s winner is Allan Wright. Congratulations – you both won a family pass! A winner will be drawn every fortnight until the end of October.

Correction: The Electoral Commission advertisement on page 2 in last week’s issue, wrongly stated ten councillors would be elected. There are only nine councillor positions.

Forbes Show on 9th and 10th September:
It is only a fortnight until the 2016 Show! Make sure to pay your annual membership of $40, which covers entry for you, one guest and school-aged children on both days of the Show. Single membership is $30 and covers one adult and three school-aged children. Also get some earlybird ride tickets, at $25 per sheet for $30 worth of rides! Entries are still open for the Miss Showgirl award with fantastic prizes to be won. Entry forms are available at the Show Office. There are many other events you can enter, including Photography, Fine Arts, Cooking, Lego, Handicrafts and Needlework. Every entry makes the Show bigger and better! More information on the Forbes Show Facebook page or call Julie Hurkett on 6852 1311.

Boscar Awards: As tension is building for the Boscar Awards, it is good to note that this competition is open to all businesses in Forbes and not only to Business Chamber members. So get your entries ready before the closing date on 29th August by logging in and register your entry!