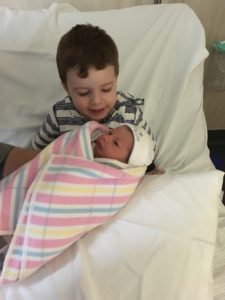 Stork News: Eliza Jane Ryan was born at the Forbes District Hospital on Monday, 1st August at 6:46pm. She is being snuggled by her big brother Harrison. Her proud parents are Nick Ryan and Katrina Ferguson, and grandparents Fiona Ferguson, John Ryan, John Ferguson and Vicki Purcell.

Welcoming Danny Green: Local Councillors, including Mayor Phyllis Miller, and Forbes residents turned up at the Forbes Services Memorial Club last Wednesday to welcome the Council’s new General Manager, Danny Green. Mayor Phyllis welcomed him on behalf of the Council and the town of Forbes. Danny said he was enjoying his time in Forbes and that he had an open door policy. So if you want to discuss anything with him just call in for a cup of coffee.

Vietnam Veterans Day: This will be held at the Cenotaph in Victoria Park on Thursday, 18th August at 11am to commemorate the 50th anniversary of the Battle of Long Tan on this day. The bravery, tenacity and sacrifice of the Australian and New Zealand soldiers in this battle, and the support provided to them by the RAAF and artillerymen from the two countries and the US are
remembered as one of the Vietnam War’s defining moments. There were 18 Australian casualties and 24 wounded.

Local Government Election: Nominations for candidates in the Local Government election to be held on 10th September had to be lodged at Council on Wednesday. The Returning Officer for the election is Geoff Lark, who is covering Forbes, Parkes and Lachlan Councils. Voting is compulsory for all residents in the Forbes Shire who are registered on the electoral roll. There is no absentee voting in Local Government elections. If you are unable to vote on election day, you can vote either by pre-poll or postal vote. Pre-poll voting will be open from 29th August to 9th September in the Council Chambers. Postal vote application forms are on the votensw website. The election on 10th September will be at the Forbes Town Hall from 8am to 6pm.

Riding for the Disabled (RDA): The Forbes Branch is raising funds to purchase a buggy specifically suited for the use of wheelchair bound RDA participants. There is a raffle with two great prizes: 3 days and 2 nights at Sahara Park Riding School for two children fully accommodated, and $500 Forbes shopping dollars. They are also selling tickets in 100 clubs. The winners of the first 100 club are 1st Marg Biddle; 2nd Marion Hales; 3rd Barry Jelbar, and the second 100 club winners are 1st Alan Pritchard; 2nd Len Piestch; 3rd Paddy Molloy.