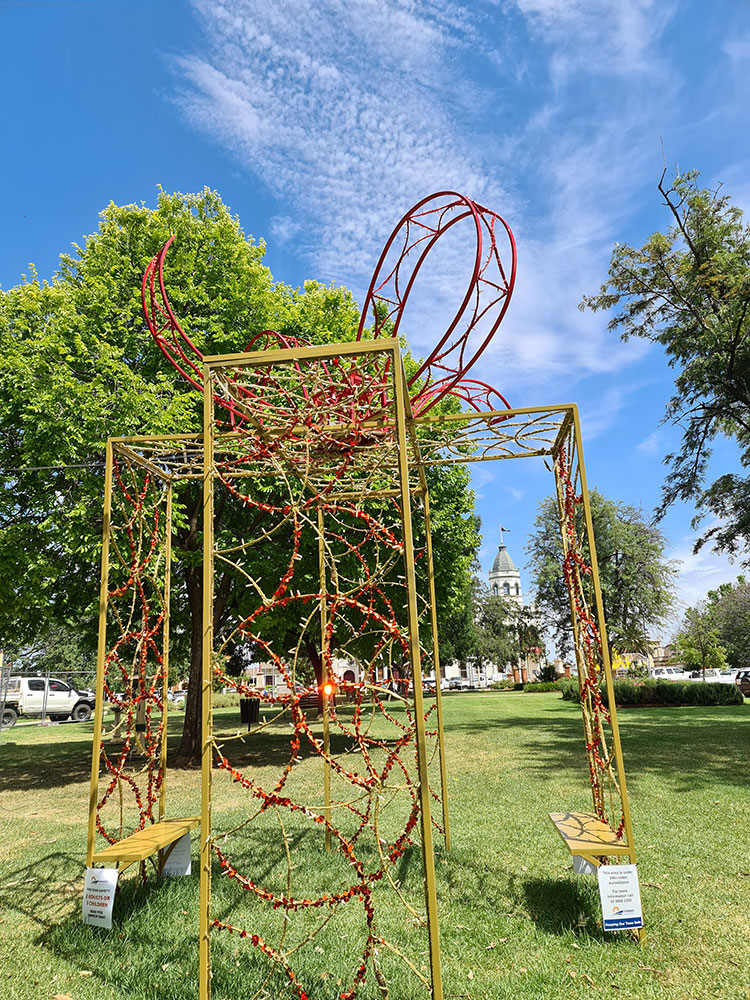 The newest light up installation in Victoria Park.

Christmas In Forbes Shines: Forbes residents will be happy to know Christmas is not cancelled this year. Despite a tumultuous year for events and celebrations, Forbes Shire Council has decorated the town with an extensive array of Christmas decorations including many new locations and displays. Mayor Phyllis Miller said the community deserves a pick-me-up after what has been a difficult year after many difficult years of drought.
Recognising the broad appeal of these decorations in lifting community spirits, Council has expanded the Christmas decorations project to include more displays in and around the CBD. Lions Park has also been included in the display and will have lights, similar to the ones in Victoria Park, hanging from the trees.
Victoria Park will also feature an immersive Christmas display which will give residents and visitors a fantastic vantage point to watch the projection on Town Hall.
The tale of Santa Koala by Colin Buchanan and Glen Singleton will be brought to life on the Harold Street side of Town Hall. The short story animation will be projected onto the building with lighting effects like those seen at Sydney’s Vivid Festival.
The lights and projections will remain in place until January 2021.

Christmas Colour-In Competition: The Forbes Phoenix is running a Christmas Colour-In Competition from Friday, 27 November to Friday, 11 December 2020. The winner of the competition will win a special prize just in time for Christmas, with the winner to be announced in the Phoenix’s last edition of 2020, on Friday, 18 December. To enter the competition, simply colour in the picture on page four, take a picture of the complete colour-in, and send it to us via the Forbes Phoenix Facebook page or email editor@forbesphoenix.com.au with the entrants name and age. We look forward to seeing the wonderful work from children in the Forbes Shire, so get colouring!

The Book Dispensary: Forbes’ newest local is opening on Thursday, 10 December at 4 Templar Street. This new business is a joint venture between Debbie Prior, Warwick Marx and Michael and Ange Flannery and brings to Forbes a long-awaited offering for the book enthusiasts in the community.
The team have been working hard to get the store open before Christmas and aim to end what has been a challenging 2020 for the community on a positive and exciting note.
Debbie Prior said that she is really excited about this new venture and the opportunity to open not only a new business in Forbes, but a bookstore. “It will be sad to leave my role at Flannery’s Pharmacy after nearly 23 years but I am looking forward to starting a new chapter in my life,” she said.
The Book Dispensary will be launched on Thursday and will be open for late trading during December so drop in and say hello.