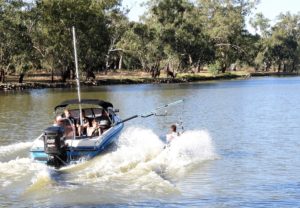 Nearly 70 barefoot skiers from all over NSW attended a coaching clinic at the Forbes Aquatic Centre and Bundaburrah over three days last week.

“The Forbes barefoot coaching sessions are growing and the feedback has been sensational,” said Jim Cronin. “We have al- ready taken bookings for the clinic in 2018.”

The sessions grew from one last year, to two this year, but due to high demand a third had to be added.

The Forbes Phoenix met with some participants last Friday. Toby Cox (10) said he was “feeling really good about attending the coaching clinic”. Toby is a competent water skier but was trying bare foot skiing for the first time, “because my Granddad does it”. Wes Murray (14) likes to barefoot because “it’s fun”. Wes was happy he barefooted

on Thursday using the boom bar and was looking forward to stepping up and taking the rope behind the boat.

Peter and Leanne Gosling travelled all the way from Sydney on Friday morning to bring their son Kye (15) to the clinic. “We are very proud parents,” said Leanne, and when Kye ranked third in the Junior Boys NSW Barefoot Championship last week- end they were over the moon.

There were three coaches at the clinic: Brendon Chattaway, Peter O’Neil and Brendan Paige. “Barefoot skiing is the pin- nacle!” said Brendon. “It is challenging but it is the ultimate freedom when skiing.”

Jim said all three coaches were looking forward to holding the coaching clinics again next year to take participants through their paces in a safe and fun environment.