You are here: Home / Articles / Showtime For Spectacular Students 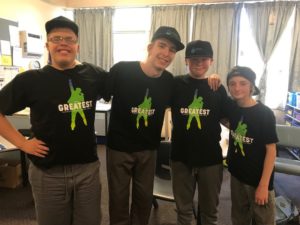 Eight students from the Forbes High School Support Unit were selected to form part of a section in the School Spectacular, namely D’Arts Ensemble, which specifically caters for students with special needs.

All the students were extremely excited when they recently received their School Spectacular bag and cap.

The school’s support unit staff, students and parents/carers of the students attending the Spectacular have all been amazed at the overwhelming response received from local community groups and local businesses. Their major sponsors include Evolution Mining ($2,000), RSL Club ($1,200), Lions Club ($1,000) and Ipomea (Rotary) Club ($500). The donations have lessened the students’ total expenses by an astonishing 65 percent. They have also each received a School Spectacular shirt, bag and cap which will be extremely useful during their week in Sydney.

They are in Sydney this week until tomorrow, and will be doing four separate performances at Qudos Bank Arena. They will be performing a surprise dance that may not be revealed until the first performance today.

Anyone wanting to watch the show can do so when it is televised the following week on Saturday, 1st December on Channel 7.