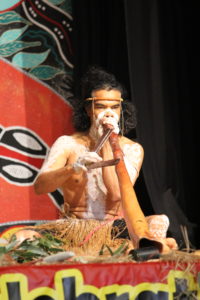 School students from all over Forbes helped celebrate NAIDOC week on Tuesday. While the festivities were relocated to the Town Hall due to weather conditions, nothing could dampen the mood. Forbes North Public School’s Wiradjuri Choir raised the rafters with song, and Red Bend Catholic College’s Indigenous dance group took to the stage to showcase traditional dance.

The Forbes community was treated to a sausage sizzle with a twist; crocodile, emu, and kangaroo sausages were on the menu, as well as traditional snags for the less adventurous. But the real treat was a performance by the multi-talented Sean Choolburra, a critically-acclaimed comedian, dancer, and TV host, who captivated the crowd with traditional storytelling, didgeridoo, and dance.

As well as celebrating culture, NAIDOC week is an opportunity to recognise the contributions made by Indigenous Australians. Mayor Phyllis Miller presented the Indigenous Youth of the Year award to Ethan Markwort for his enthusiasm for sharing traditional culture. The Indigenous Person of the Year was awarded to Donna Bliss of Yoorana Gunya Family Healing Centre for her tireless commitment to closing the gap.