You are here: Home / Articles / Scores Good in Difficult Conditions 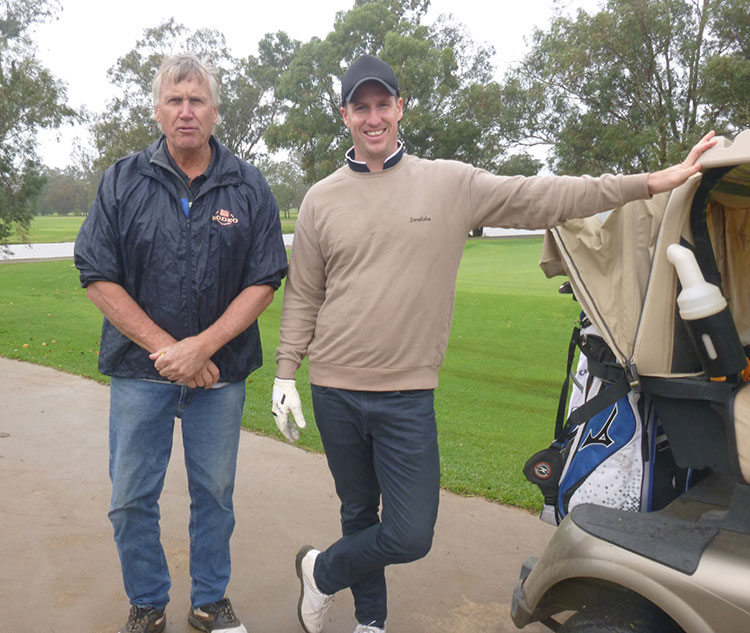 Stephen and Simon Uphill ready for golf in cold and wet conditions.

Forbes golfers were treated to some difficult conditions on the weekend, making scoring difficult for the 88 players contesting the Men’s Monthly Medal on Saturday, 2 May, sponsored by Adept Plumbing.

A-Grade was decided by count back with John Zannes winning with his relaxed nett 70, pushing Cameron McMillan to runner-up after his fine 70 nett. In B-Grade, Anthony Alley finished on 68 nett to win, with Jono Roylance runner-up on 70 nett.

C-Grade went to Ben Robinson on 72 nett. Runner-up was Bede Tooth on 73 nett. The ball sweep went to 74 nett.

With a return to the ‘Flagstick in,’ do not touch model, we were able to reinstate the NTP’s. These went to 9th, Denis Culley, 19th, Andy Dukes.

Many players lost shots on the greens as their ‘nearly’ putts shaved past the hole, but most were pleased to be playing under near normal conditions.

The Sunday Stableford Medley was again quiet, with Cam McMillan carrying his Saturday form to win on 35 points. Runner up was Neil McMillan on 34 points with no NTP’s played.

Reports for golf played through the week we have the following:

The Tuesday Golfers had 17 players. Barry Parker finally won on 33 points. Runner-up was Viv Russell on 32.

The Tuesday Golfers send their condolences to the family of Algie Crowe, who passed away recently. He was a founder member of the Tuesday group, and did all he could to support them in their activities.

Because of the wet weather there were no Thursday Vets.

The Winter 9-Hole Individual Nett comp second week saw fewer numbers, due to the wet weather. There was a technical hitch in obtaining the scores, so check in the Pro Shop for details. Better weather this week should see more players on the course.