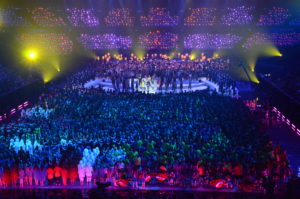 Six Forbes High students returned from Sydney on a high after Saturday night’s final performance of Schools Spectacular ever that now holds the Guinness World Records title for Largest Amateur Variety Act. The Schools Spectacular cast, officially counted as 5322 for the Guinness World Records title, included a 2,700-strong choir; 2,300 dancers; an 80-piece symphony orchestra; a world-class stage band; and more than 40 featured artists. The show lived up to its theme: Dream Big.

At times the performers flooded the arena stage with vibrant intensity while in other intimate scenes performers captured the huge stadium audience with their mesmerising talent. From classical extravaganzas blending the symphony orchestra and choir to explosions of pulsating rock and pop, the Schools Spectacular colourfully unfolded
the broad spectrum of music and dance. Schools Spectacular Executive Producer Jane Simmons said everyone should be proud to share in the triumph of the 2016 show. “Schools Spectacular 2016 was amazing,” she said.

“Every single performer, the incredible teachers and staff who brought it all together at the arena and at school, the students’ parents and all who contributed deserve huge applause for the incredible efforts.”