Home » Sandbags To Be Placed On Rankin Street 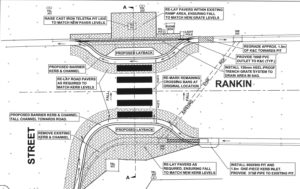 Lines will be marked and sandbags will be placed around the crossing at the corner of Templar and Rankin Streets next week as part of the Forbes Shire Council’s plan to upgrade the pedestrian crossing there. Council’s plan will involve bringing the kerbs on either side of the crossing further out into the street.

Council may also decide to raise the crossing in order to slow traffic down driving over it, but this is yet to be confirmed. Under the plan, Council also hopes to add three extra car parking spaces near the crossing by bringing the red ‘no parking’ sign further up the street. A State Government grant will fund the project, which has been quoted at $21,850, and must be spent before the end of the current financial year.

However the plan came as a surprise to local businesses on Rankin Street, which received a letter just two days prior to Council initially wanting to start work on the project, which was Monday this week. Cahill’s Footwear owner Martin Cahill, whose store is near the crossing on Rankin Street, arranged a meeting between businesses and Council on Tuesday evening, with about 20 people attending.

As a result Council decided to place sandbags as a way of physically marking on the street what they planned to do so local businesses could get a grasp of it, and a follow-up meeting will be held at 5.30pm on Monday May 2.

Mr Cahill and Chapter Two staff member Kim Sly said concerns were held mostly for the lack of communication from Council over the matter, but also on the kerb widening making the street too narrow for traffic. Council Acting General Manager Max Kershaw apologised for giving businesses just two days notice, adding it was “unacceptable”.