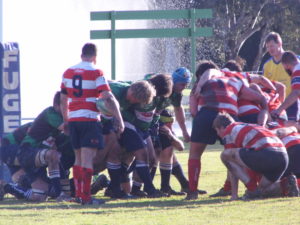 Last Saturday was Sponsors Day for the Forbes Rugby Union Club, which was an opportunity for the club to show their appreciation to their valued sponsors for their support. The Forbes Platypi took on local rivals, Cowra Eagles in all three grades. First Grade were victorious winning 31 – 5 as were 2nd Grade with 47-7. The Colts were unlucky to loose by one try going down 17-12.

It was also the Annual Charity Day for the club with the Forbes players taking the field in the Green Lantern Charity guernsey’s which were later auctioned off with all proceeds going to Lung Foundation Australia, CanAssist and other charities.