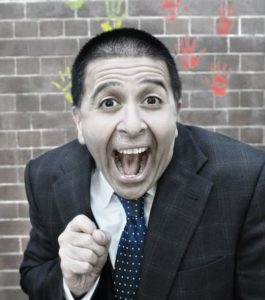 One of Australia’s most loved and leading comic entertainers Vince Sorrenti will be in Forbes next year for the Rugby Union Club’s major annual fundraiser. Vince will be the guest speaker at the President’s Lunch on Saturday, 18th March with an expected attendance of 880 guests. Vince, a four-time winner of the Mo Award for Australia’s Best Stand-Up Comic, is highly sought after as a host and performer.

He not only has a career as a TV host, but is also an actor, MC and writer. The event will again be managed by the
table captain system, which sees invitations sent to representatives who manage payments and attendance for a table of ten. There is ever-increasing demand for seats so numbers will be capped in 2017. Community members who would like to be added to the waitlist for table captaincy or fill-in attendance are invited to email rugbylunchforbes@
gmail.com. Existing table captains should expect to receive event information soon.