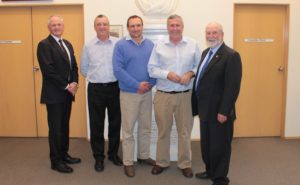 Forbes and other flood ravaged communities in the Central West have been thrown a life-line with $13 million from the NSW Government to provide immediate funding relief for councils to fix local roads destroyed by floodwater. Forbes is among the five most affected Local Government Areas that will receive $1 million each. The other councils are Lachlan, Parkes, Bland and Hilltops. Deputy Premier Troy Grant and Minister for Roads and Freight Duncan Gay were in the region last week and announced an additional $1 million to investigate options to improve flood resistance of the Newell Highway at Tichborne to keep the highway open during heavy flood events. “Some local government areas are experiencing the wettest conditions in decades with significant road detours in place and some likely to be there for weeks,” Troy said.

Minister Gay said he had inspected roads across the region and met with local councils and it was clear the repair of the council road network was a priority. “The task to repair the network is going to be a big one – with the base under many of the roads completely saturated,” Duncan said.